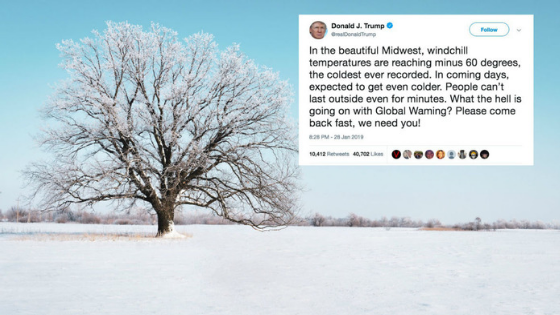 “In the beautiful Midwest, windchill temperatures are reaching minus 60 degrees, the coldest ever recorded. In coming days, expected to get even colder. People can’t last outside even for minutes. What the hell is going on with Global Waming? Please come back fast, we need you!” – Donald Trump

So do we agree with what the president of the United States has to say? Well, the person who can’t spell the word “Warming” correctly will have no sense on the issue. It’s better to ignore such statements and look at some scientific data :

So, Trump or the people who have real knowledge and are experts in the field?

Even though the planet is getting warmer, cold weather still happens in winter or at very high elevations or high latitudes year-round. Northern hemisphere winter weather patterns are a complex interplay between the upper atmosphere conditions over polar regions and mid-latitude conditions over the oceans and on land.

The seasons we experience are a result of Earth’s tilted axis as it revolves around the sun. During the North American winter, our hemisphere is tilted away from the sun, leading sunlight to hit us at an angle that makes temperatures lower. While climate change does not affect Earth’s tilt, it does have potential implications for many of the other factors that influence winter weather in the US, including Arctic sea ice, the polar jet stream, the polar vortex, and El Niño.

So in short, winters are going to be harsher and summers are going to be hotter. Resulting in more heavy snowfall and frosty surroundings. Adverse and extreme weather events, such as heavy rain, heavy snowfall, strong winds, extreme heat and cold, drought and reduced visibility, can have a negative impact on the transport sector, causing injuries and damages as well as other economic losses. Frequency and intensity of weather and climate extremes are likely to continue to change in the future due to the projected climate change; consequences of changes will be both negative and positive for transportation. The EWENT project (Extreme Weather impacts on European Networks of Transport) funded by the European Commission under the 7th Framework Programme (Transport, Horizontal Activities) has the objective of assessing extreme weather impacts on the European transport system. This report frames the findings of Work Package 2 (WP 2) of the EWENT project. The study provides the first comprehensive climatology of the adverse and extreme weather events affecting the European transport system by estimating the frequency (or probability) of phenomena for the present climate (1971-2000) and an overview of projected changes in some of these adverse and extreme phenomena in the future climate until 2070.

A major effect of snowfall is seen in the transport industry where trucks and trailer owners have to suffer huge financial losses during the heavy winters. Apart from the adverse monetary losses, there is a huge threat to the life of truck drivers and owners. Huge layers of snow gets accumulated on the rooftop of trucks and removing them is a severe task. It requires a huge amount of investment in labor or machines and high time consumption. Hence leading to high downtime cost even injuries.

So what is the best and the safest way to solve this issue of snow removal?

Check out the website to know more about Durasweepers solution and get one now!