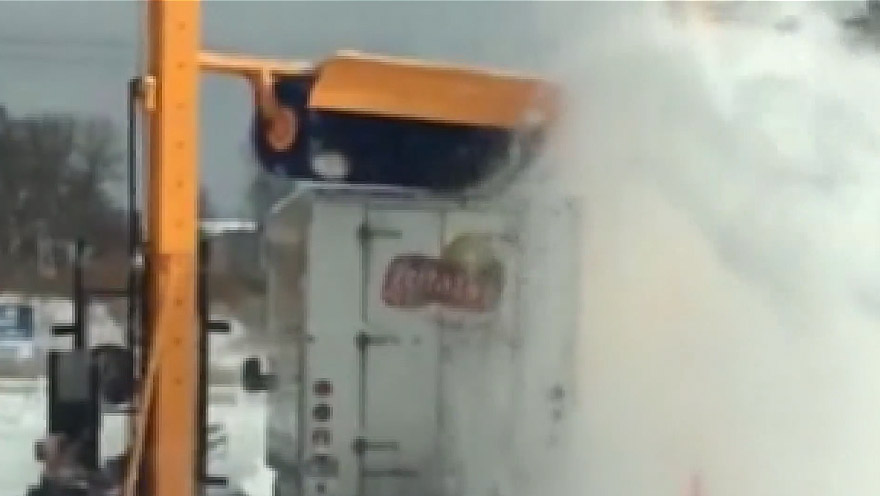 Behind trucks: be aware of falling snow and ice behind a driving truck, automobile association in Germany ADAC warns

In winter snow and ice is expected on the rooftop of truck trailers, containers, buses, and similar commercial vehicles.

In Germany, according to § 23 of the StVO (Straßenverkehrsordnung, or German Road Traffic Act), the driver is responsible for trucks’ good and safe conditions for driving. Truck drivers’ duty is to keep their vehicle snow and ice-free. Otherwise, a fine of 25 euros is given. If an accident occurs due to snow or ice on the vehicle, the driver faces a fine of up to 120 euros and a point in his driving license. In the worst case (§ 315 b of the StGB (Strafgesetzbuch – German Criminal Code), if people are harmed, the result is a prison sentence for negligent bodily harm or killing.

Penalties vary in Europe according to the country. In the UK if the driver is caught by police driving with snow still on the top of a truck or other vehicles, or an officer sees it fall onto the road from the vehicle,  the fine of  60 £ is given and three penalty points added to the license. In the UK the fine fall in line with section 229 of the Highway Code which outlines correct guidelines for driving in adverse weather conditions. The rule states that drivers must “remove all snow that might fall off into the path of other road users”.

In Norway, it could result in fines of several thousand kroner, and in serious cases revoked driving license. Snow removal falls under regulations on the use of vehicles (§ 1–3 Provisions) which state that the visibility must be sufficient for all sides, including ensuring that snow, ice, dew or mark or other object does not impede visibility or interfere.

In Sweden, it is illegal to drive with snow on a rooftop of the trailer. Snow is considered to be a cargo that is not stuck or secured to the roof and can lead to a conviction for defective cargo with fines up to 1500 SEK.

Solution for the drivers: how to clean snow from the top of your truck trailer?

The driver has to remove dangerous roof loads such as snow and ice. Unfortunately so far the majority of trucking companies and special clearing points in some truck stops and service areas using a time consuming and not efficient scaffolding system. While in the meantime Durasweeper USA company has extended its manufacturing facilities to Europe and makes installations of the automated snow cleaning systems. Durasweeper is able to clean the rooftop of the trailer in only 0.45 seconds. Drivers can safely clean the roofs of their vehicles and be on a road in no time without spending 30 minutes shoveling their rooftop and freezing on scaffolding. For the safety of all road users, it would be desirable for more rest areas to be equipped with efficient and time-saving systems Durasweeper.

Penalty and hazards due to...

During the winter months in regions with significant snowfall, snow and ice accumulate on...