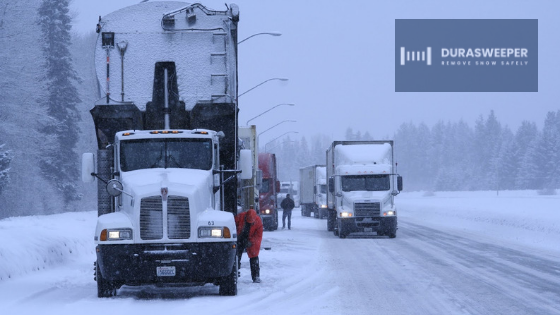 Penalty and hazards due to snow covered vehicles

During the winter months in regions with significant snowfall, snow and ice accumulate on the tops of all vehicles types, including straight trucks, intermodal containers, large trucks & trailers and busses, which can then dislodge during travel. These chunks of snow and ice may strike other vehicles, creating a safety issue that results in property damage or injury to other motorists. The size and weight of ice sheets that may dislodge from larger vehicles in transit create a more significant safety concern for the trucking industry. Operational impacts from accumulated snow and ice are also possible, including size and weight limit violations and lowered fuel economy.

Removing snow and ice from the tops of trailers creates a series of safety and operational challenges.

What’s the law has to say

Penalties vary in Europe according to the country. For example in the UK If you are caught by police driving with snow still on the top of your truck or other vehicles, or an officer sees it fall onto the road from your vehicle, you can be given 60£ fine and have three penalty points added to your license. In the UK the fine fall in line with section 229 of the Highway code which outlines correct guidelines for driving in adverse weather conditions. The rule states that drivers must “remove all snow that might fall off into the path of other road users”.

For example, in Norway, it could result in fines of several thousand kroner, and in serious cases revoked driving license.  Snow removal falls under regulations on the use of vehicles (§ 1–3 Provisions) which state that the visibility must be sufficient for all sides, including ensuring that snow, ice, dew or mark or other object does not impede visibility or interfere.

In Slovakia, if you have a snow-covered vehicle, the police may give you a fine. For an unreadable registration number, you will pay 50 €. If headlamps are covered, you also pay 50 €. A fine of up to 50 € is also a threat to the driver who left a snow cover on the roof of his car.

In Sweden, it is illegal to drive with snow on a rooftop. Snow is considered to be a cargo that is not stuck or secured to the roof and can lead to a conviction for defective cargo with fines up to 1500 SEK.

Snow on a vehicle is a significant threat to life

Not removing snow could pose a potential hazard for other drivers. Especially in the case of trucks moving on national and international highways with high speed, it can lead to some catastrophic road accidents and hazards.

You could be charged with “driving without reasonable consideration for other road users”. The fine can be extended to legal implication to the truck or vehicles owner and even the company.

In the UK in an extreme case where an incident has ended up in court, the consequences could be more severe. The driver could be charged with “careless driving” and face a sanction of between 3-9 points and a fine capped at £5,000.

In addition, the law also states that all lights and number plates should be clearly visible. In the murky grey light that often comes with driving in wintry conditions, it’s advisable to drive with your sidelights or dipped headlights on so as other drivers can see you.

Truck drivers tend to avoid this, as it’s a very tedious task of removing snow from the top lights on the rooftop. It involves a significant amount of time ( app. 30 – 45 minutes) to remove snow from the rooftop and also high labor cost. According to the UK highway report- 2 out of 10 accidents during the winter occur due to accumulated snow on the rooftops, especially from trucks and other heavy vehicles.

Solution: A fast and convenient system for snow removal from the rooftop of commercial vehicles is present in Europe!

Check out the website to know more and get your quote.

Be safe and responsible with Durasweeper !!

Behind trucks: be aware of...

In winter snow and ice is expected on the rooftop of truck trailers, containers, buses,...