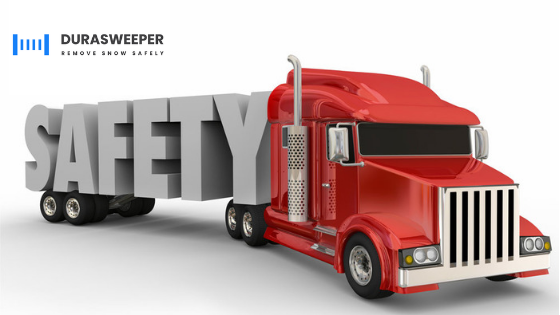 Every year in the high snow region of the European Union, around 200 truck drivers get severely injured while removing snow from their trucks. During the winter months in regions with significant snowfall, snow and ice accumulate on the top of vehicles, which can then dislodge during travel. These chunks of snow and ice may strike other vehicles, creating a safety issue that results in property damage or injury to other motorists.

Removing snow and ice from the top roof of trailers creates a series of safety and operational challenges, documented in detail later in this report. What may be viewed as the simplest solution, to have workers or drivers climb onto a trailer roof and manually remove snow and ice by shoveling or raking the trailer roof, creates its own set of serious safety issues, including slips and falls from trailers. Other methods for snow and ice removal can be more complex, require routine maintenance, or be cost-prohibitive to a significant portion of the industry. Routinely removing accumulated snow and ice can mitigate several safety-related risks including:

Now the monetary downfall can be managed by cutting down costs on the fleet and other sources, but the threat to life and injuries can be really alarming. Hence its really important to provide the best and the most efficient way of snow removal from trucks and trailers.

There are many solutions available in the market, starting from manual cleaning to huge machines. But either they are too time-consuming or costly, resulting in truck owners or drivers to suffer from the snow accumulation issues. Also as explained, manual labor can lead to injuries and life threats.

Hence, Durasweeper provides the safest, fastest and cheapest snow removal system in the market. The entire layer of snow from the rooftop of trucks and trailers can be removed in less than 50 seconds and just with the push of a button. Cutting down high labor cost and saving hours of daily downtime. But most importantly, by being the safest solution, there is no harm or threat to life or even a single injury.

As one of the Durasweeper users stated :

“ My arms used to freeze and removing the snow on the rooftop of the trucks was a very tedious task. After getting Durasweeper’s solution, I am saving at least 4 hours of my downtime and all my truck drivers are safe. “

Check out the website to know more about Durasweeper.