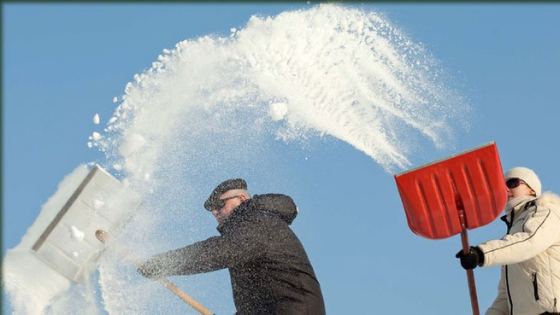 Snow removal from commercial vehicle rooftop proving to be hazardous. What’s the solution?

Next time you are faced with the daunting task of shoveling snow from the rooftop of trailers, consider that this task send thousands to the hospital every year. Resulting to a high labour cost for companies. And this number is growing significantly.

Every winter trucks and other commercial vehicles get covered with thick layers of snow. Drivers either carry the shovel and climb on top of the vehicle to remove the snow layers or even hire people to do it for them. When temperature hits below the bearable mark, this task becomes a nightmare. Most of the effects of this process cannot been seen right at the moment. But it adversely bring a negative impact on your health and body.

These facts are of a high concern for companies which care about a well being of their employees. Another fact is that employees injuries and health issues can cost companies dearly.

As the winter season is starting to freeze everything around us, it’s becoming a huge issue for truck owners. As one of the fleet owner mentioned during an interview:

“I have no other option than to hire people and get the snow removed from my trucks. There are dozens of labours who come every morning with shovel and remove the snow before the trucks head out on the roads. I have seen many of them without gloves and freezing their hands.”

This problem cannot be just solved by providing proper gears or gloves to the labourers. As staying out in such cold temperature and making your muscles break is really injurious.

So what’s the solution ?  How can this issue be solved without bringing risks to the lives of the labourers ?

Thanks to Durasweeper’s snow removal system, it’s no longer a dangerous task. Rather, with just a push off a button, one can remove snow from their trucks and vehicles in less than a minute. Durasweeper Snow Removal system provides the fastest, safest and cheapest system to automate this entire process. The trucks or vehicles just need to pass through the machine shown below and in just 45 seconds your trucks will be cleared with snow.

It’s time we think about the safety of others and save hundreds of injuries with the help of Durasweeper. As the CEO of the company states:

“Removing snow is not a task, rather a problem. Unlike any problem it’s time we make it safe and convenient with Durasweeper”